Originally created for Nate Treme's Goon Hack jam, SPRAWL GOONS: UPGRADED is a simple 2d6 cyberpunk roleplaying game for those who like their dark futures light.

Ideal for online play, with the 14pp A5 layout designed to be easy to read on phones or tablets.

• A plethora of optional rules

And the BOOSTER PACK is out now!

And build your own drones, remotes and bots, with the comprehensive, table-heavy Remote Control!

Go get your dystopia on.

In order to download this game you must purchase it at or above the minimum price of $3 USD. You will get access to the following files:

Combined and POD edition is a little delayed as I’m cramming in a bunch of extra content, so please bear with me! :)

I've just found this game. What's the combined edition you speak of?

I’m working on an omnibus edition, primarily for print-on-demand, which combines the SG rules, the booster pack, the plug-in pack and with some of the vehicle rules from Metal Express. Pages are being re-ordered so it makes sense, rather than just stitching the current pdfs together. There’s extra content going in too, including a city setting.

sounds awesome. You mention that some of the vehicle rules from Metal Express are going in - any particular reason as to why all of the rules aren't going in? Thanks!

it’s mostly the tables not making the cut. I didn’t want the book to be mainly vehicle stuff.

Hmmm, maybe you could perhaps just release a big-book o' tables (pdf) for the game for those of us that like having everything handy? 😁

Hello! Any word on the collected edition release? Great work on everything

Yes indeed! It’s almost there, so sometime in the next few weeks. :)

I think initiative may need a little clarification considering how player-facing the game is.

When I run it, I use it if NPCs initiate hostilities or use ambush tactics, but you don’t need to do that. It’s just there if you want it.

A better way would be to let the PCs get a Reaction vs enemy DS Action Roll to ‘dodge’ in the first instance if the NPCs kick off, assuming the PCs don’t want to just go on the attack. If they fail said Reaction roll, they take the difference in damage from the first strike (as standard).

I’ll make it clearer in the combined POD edition (currently in progress).

A French version of Sprawl Goons Upgraded is available here

Thanks to Geist for his kind permission ;-)

That looks amazing! Great job! I love the sample characters.

I'm talking about on my blog here:

Would you agree that I publish a French translation of the Sprawl Goons Upgraded rules, for free of course?

Yes, of course! And thanks for the write-up on your blog! :)

Looks very clean! What software did you use to design it?

First off: YAAAAASSSSSS
Second off: Damn it now I need to figure out a different theme for my entry. 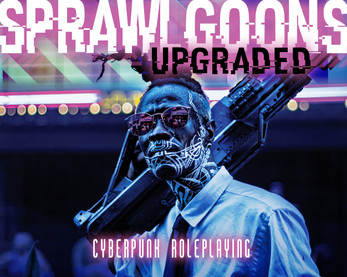